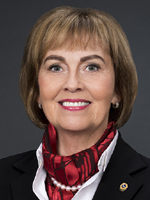 Gudrun Yngvadottir, from Gardabaer, Iceland, was elected to serve as international president of Lions Clubs International at the association's 101st International Convention, held in Las Vegas, Nevada, USA, June 29 through July 3, 2018. International President Yngvadottir is a biomedical scientist and has worked in research, education and management. Since 1990 she has worked at the University of Iceland as Vice Director at the Institute of Continuing Education. A member of the Gardabaejar Eik Lions Club since 1992, President Yngvadottir has held many offices within the association, including district governor council chairperson. She has dedicated her service to children and youth, membership and leadership development, health and wellness, including vision and diabetes, environmental projects and Lions Clubs International Foundation (LCIF). President Yngvadottir served as international director 2010-2012 on the Leadership Committee, as chairperson the second year; 2011-2013 on the Women's Task Force; 2012-2013 she was a board appointee on the District and Club Service Committee; and 2013-2014 on LCIF Governance Ad Hoc Committee. In recognition of her service, she has received numerous awards including the Kjarans Medal, the highest award of Icelandic Lions; the Lions Crystal, the highest award of Norwegian Lions; several Membership and Extension Awards; eleven International President's Awards; and the Ambassador of Good Will Award, the highest Lions Clubs International award. She is also a Progressive Melvin Jones Fellow. In addition to her Lions activities, President Yngvadottir is active in numerous professional and community organizations, including the Icelandic Association of Biomedical Scientists and has been its representative for cooperation between Scandinavian and European scientists. President Yngvadottir and her husband, Dr. Jon Bjarni Thorsteinsson, a past international director and a Progressive Melvin Jones Fellow, have one son, one daughter and six grandchildren. 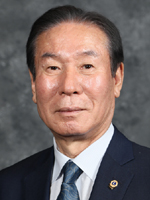 Dr. Jung-Yul Choi of Busan, Republic of Korea, was elected to serve as first vice president of Lions Clubs International at the association's 101st International Convention, held in Las Vegas, Nevada, USA June 29 through July 3, 2018. A member of the Busan Jae-il Lions Club since 1977, Vice President Choi has held many offices within the association, including club president, cabinet secretary, district governor and international director. He also served numerous times as a DGE Group Leader and served on 11 committees as a member of the International Board of Directors. In addition, he was a chairperson of the 39th OSEAL Forum in 2000 and a host committee chairperson at the 95th Lions International Convention in Busan in 2012, the largest convention ever held in Lions history. In recognition of his service to the association, Vice President Choi has received numerous awards, including the Humanitarian Partnership, Senior Master Key Award, 100% District Governor Award, International President's Leadership Awards, International President's Awards and an Ambassador of Good Will Award, the highest honor the association bestows upon its members. He is also a Progressive Melvin Jones Fellow. In addition to his Lion activities, Vice President Choi is chief executive officer of Koala Company, Ltd., an international trading company, and is also a past director of the Busan Sports Association. Vice President Choi and his wife, Seung-Bok, have one son, four daughters and two granddaughters. 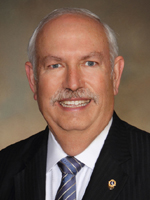 Chancellor Bob Corlew, from Milton, Tennessee, USA, was elected to serve as president of Lions Clubs International at the association's 99th International Convention held in Fukuoka, Japan, June 24 through 28, 2016. Past President Corlew is retired as chancellor for the State of Tennessee and a professor of law. A member of the Murfreesboro Noon Lions Club since 1978, he has held many offices within the association, including charter club president, zone chairperson, district governor, cabinet secretary and council chairperson. He has been instrumental in the chartering of a number of new clubs. Most recently, he worked to charter a new club comprised of lawyers and judges, which gained more than 75 members during its first year. In recognition of his service to the association, he has received numerous awards, including the Leadership Award, the Builder Key Award, three International President's Awards and the Ambassador of Good Will Award, the highest honor the association bestows upon its members. He is also a Vanguard of the Melvin Jones Memorial, a Progressive Lindsey-Jennings Fellow and a Progressive Melvin Jones Fellow. In addition to his Lions activities, President Corlew has been active in the Boy Scouts of America, the Jaycees and the American Red Cross. He has also served as a councilman in Milton and was a Major in the U.S. Army Reserve. President Corlew and his wife, Dianne, also a Lion and a Progressive Melvin Jones Fellow, have five children and eight grandchildren. 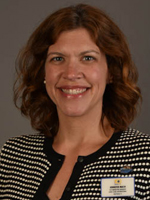 Jennifer is the Service Activities Division Manager at Lions Clubs International, the world's largest service club organization. Jennifer is responsible for providing over 1.4 million Lions Clubs members in over 200 countries and geographic areas with the resources they need to improve their service outcomes. In this capacity, Jennifer manages the organization's program development, strategic partnerships, advocacy, and volunteer engagement.

A marketing professional with a fifteen-year track record of building brands through meaningful connections with consumers, Jennifer now applies that experience to elevating the profile of Lions Clubs around the world.

Previously at Lions Clubs, Jennifer was responsible for managing the global marketing strategy for Lions Clubs International Foundation. In this capacity, she contributed to the launch of Campaign 100, the most ambitious capital fundraising campaign in the history of the foundation. 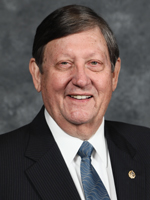 J. Frank Moore III is the executive administrator and secretary of Lions Clubs International. He is a past international president of Lions International who understands the volunteer experience, the mission and the value of our incredible service organization.

He has held key leadership positions in Lions International, including vice chairperson of Campaign SightFirst II-the most successful fundraising initiative in the history of the Lions Clubs International Foundation-chairperson of the Centennial Action Committee that oversaw the four-year celebration of our first century of service, and Moore is currently serving as the vice chairperson of Campaign 100, our campaign to raise $300 million to support our global causes.

Prior to being elected president of Lions International in 2001, Moore served as an educator and a former superintendent of education for the Daleville City Schools in Daleville, Alabama.

Moore has received numerous awards in recognition of his service to Lions International, including the Friends of Humanity Award presented by Lions Clubs International Foundation, and the Ambassador of Good Will Award, the highest honor the association bestows upon its members. He is also a Progressive Melvin Jones Fellow, recognizing his generous support of our global foundation.

In addition to his duties as executive administrator and his service as a Lion, Moore is active in numerous professional and community organizations. He is a member of the Army Aviation Museum Foundation executive committee, a certified lay speaker for the United Methodist Church, a board member of the Church Conference Laity Board and the treasurer of his church. Moore is also a former chief executive officer of the Association of the United States Army.

Frank Moore and wife Rita, a Lion and Melvin Jones Fellow, have two daughters and a son, who also are Lions.