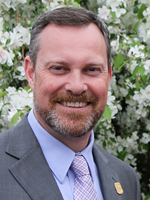 Scott became the tenth CEO of the Moose fraternal organization in December 2012. For a full decade before this new appointment, he served as Executive Director for one of the nation's top residential education programs, Mooseheart Child City and School, Inc. While in college, it was his dream to be an Illinois State Trooper, but Mooseheart became his life's work starting in 1991. Scott earned his master's degree in Human Service Administration from National Louis University in 2001. He and his wife Christie have 6 children and 11 chickens. All 17 are good eggs!